Return of the Swans

Another example of why you should let people know what you are up to is what happened on Wednesday. A couple of friends who live in the country let me know where they saw a large flock of swans. Hurrah! The geese are returning, I saw robins the other day and now swans are passing through – Spring is arriving!

We headed out armed with the information on where to head on our swan quest. It didn’t take long and we found them right where we hoped to close to Frank Lake. We are lucky around here to have a place like Frank Lake close by. For those reading this who don’t know about Frank Lake – it is a waterfowl paradise.

Of course whenever you go looking for one thing (like swans) you are likely to spot something else and such was the case today. 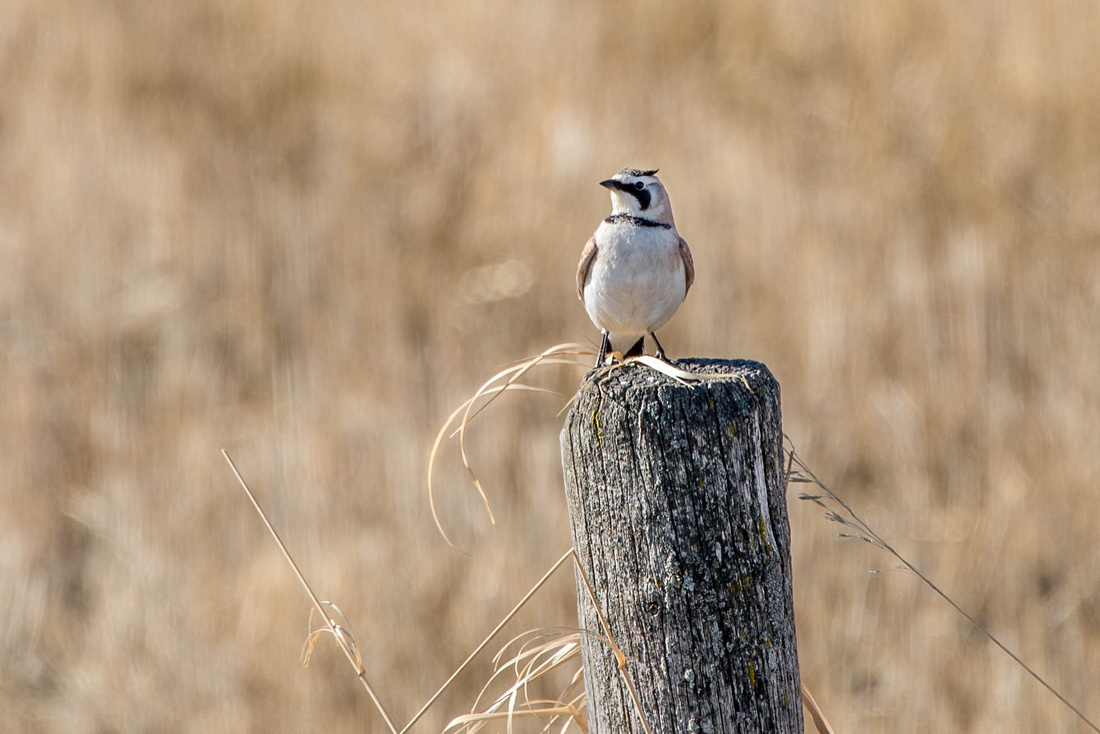 You ever drive along a gravel road and have a nondescript little bird fly up suddenly in front of you? If you’re in Southern Alberta there’s a good chance it was a Horned Lark. The problem is these guys don’t pose. They are there one second and gone the next but today I got lucky and caught this guy perched on a fence post – how awesome for me! 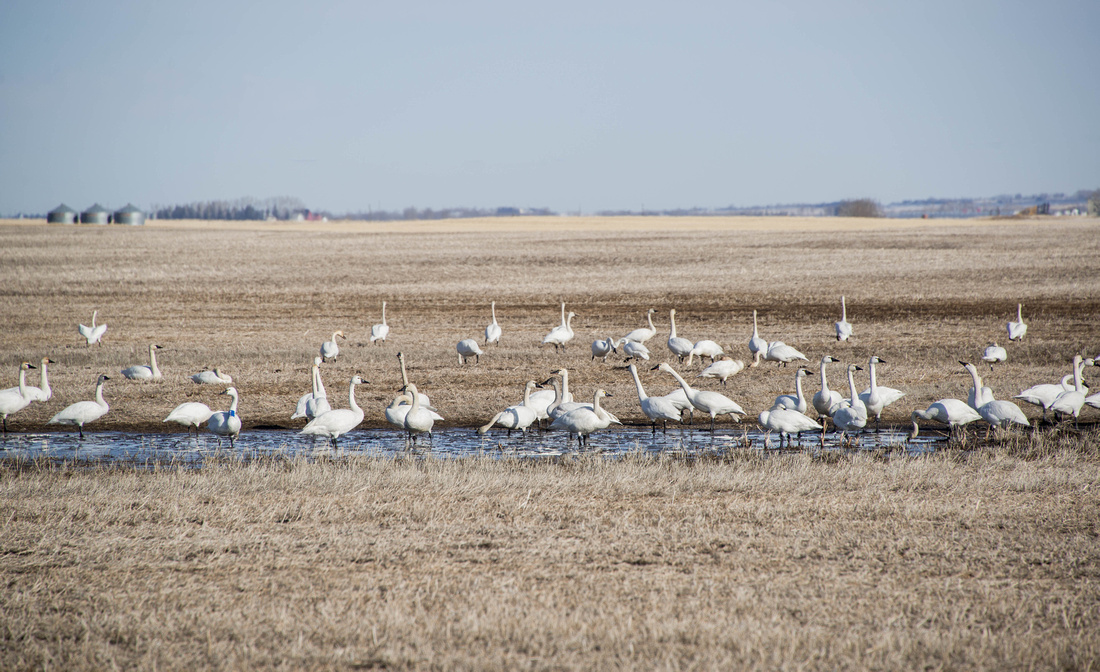 We found this group in a run off pool reasonably close to a fence line that had an opening so I could walk down to them partially hidden by the grass along the fence. It wasn’t ideal but it beat setting up a blind and sitting in it while I wait for birds that may or may not come by. 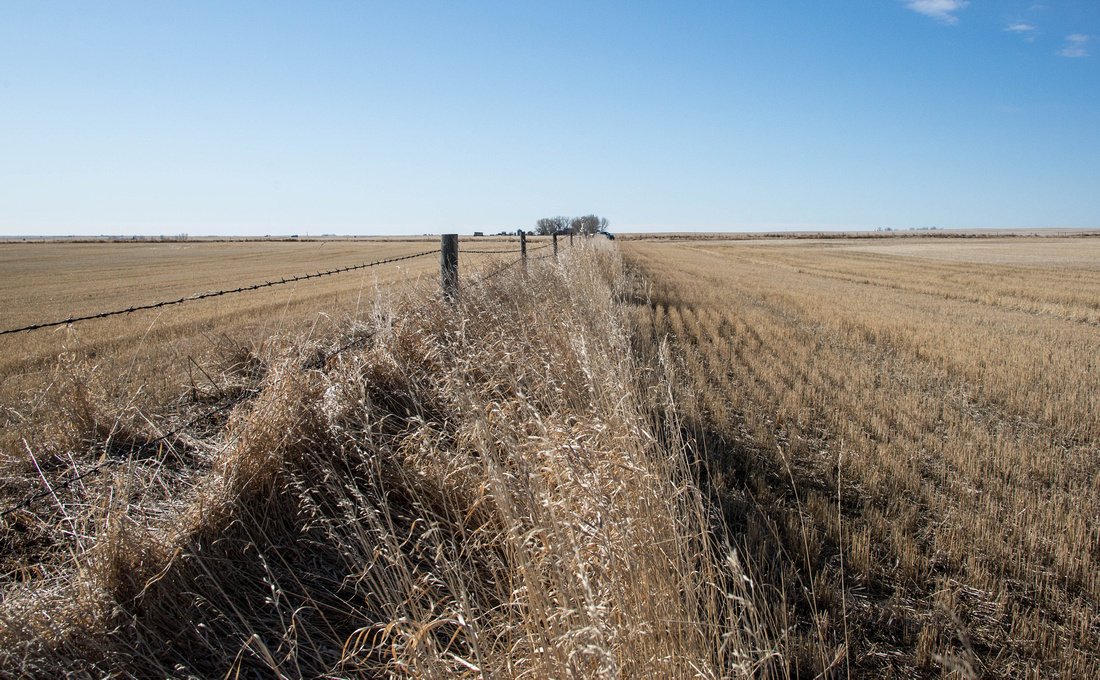 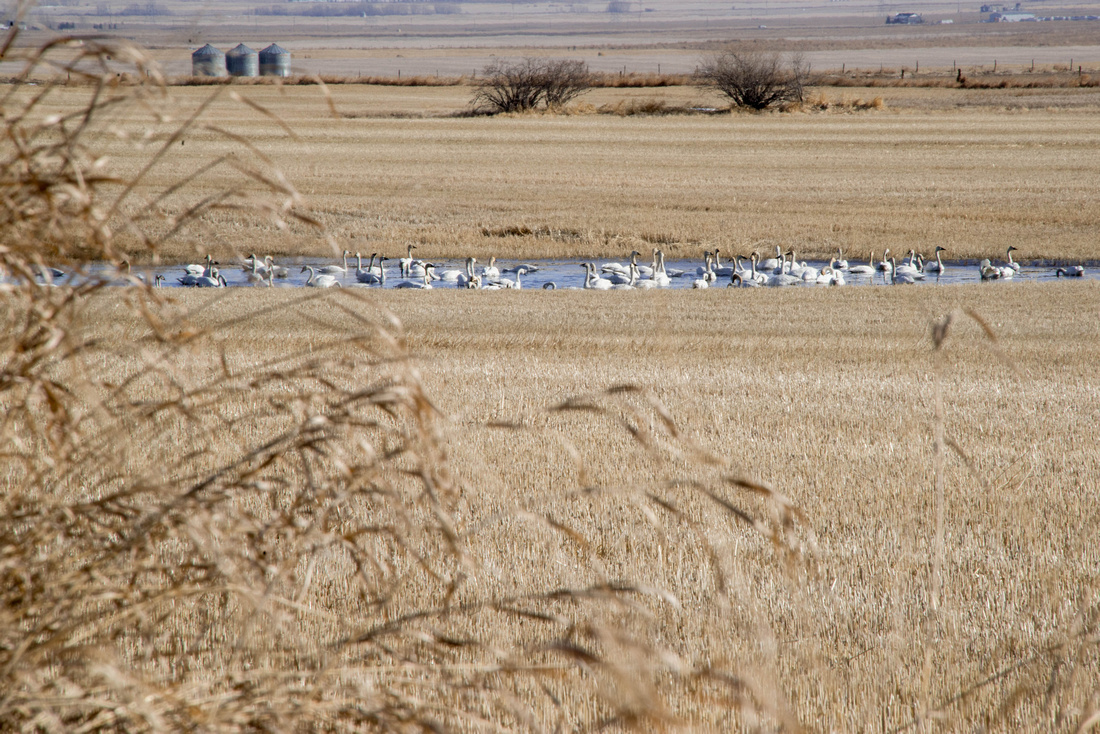 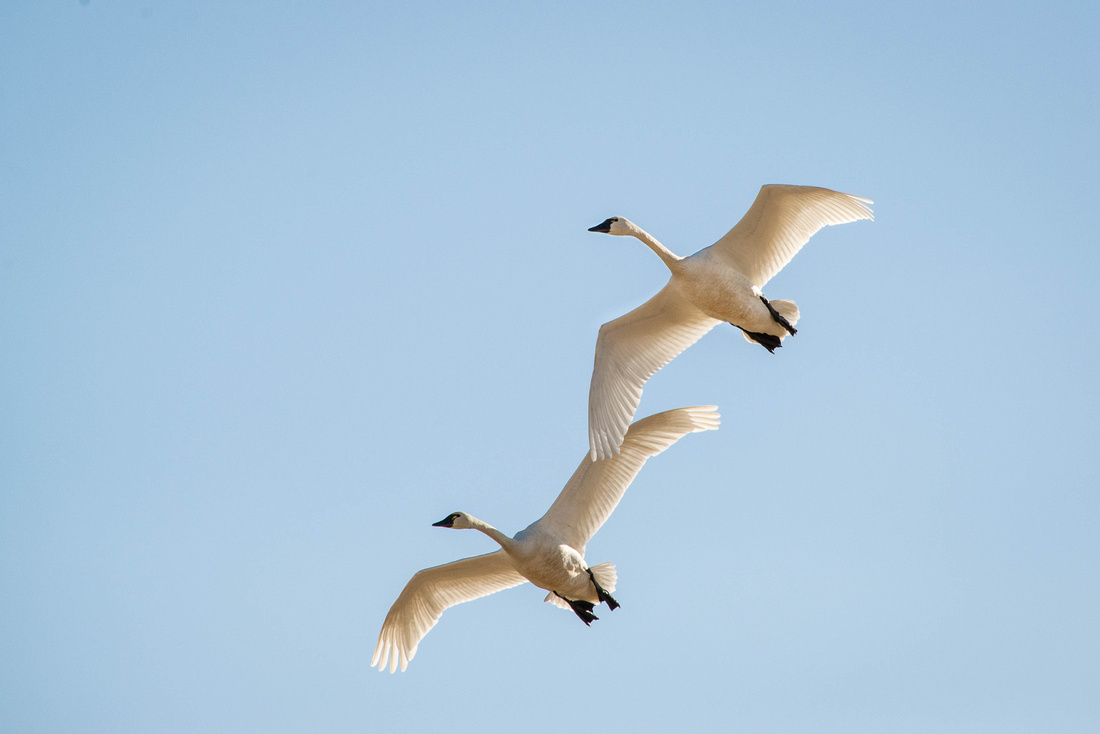 You have to have a certain amount of luck and I certainly had my fair share today as a pair of Tundra Swans left the group and circled around overhead, maybe they were checking me out – I was certainly glad they flew over, whatever their reason. 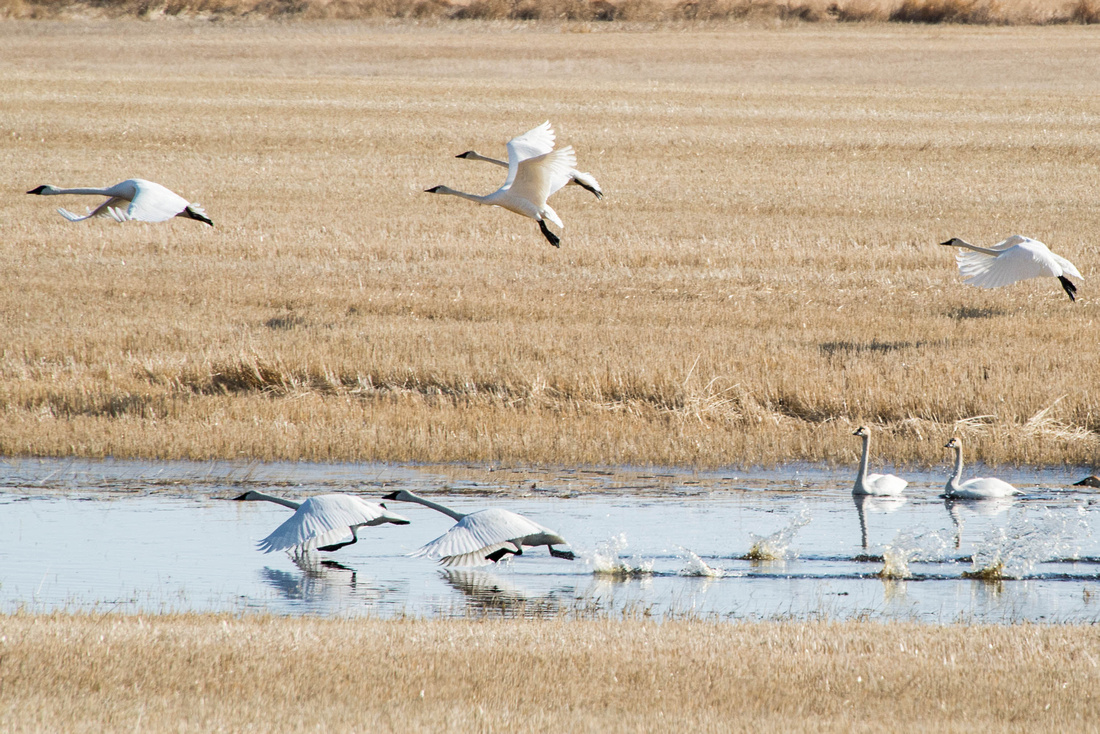 Eventually the majority of the group decided to leave their little pond. I love watching them kick up water as they use a running start for lift off. 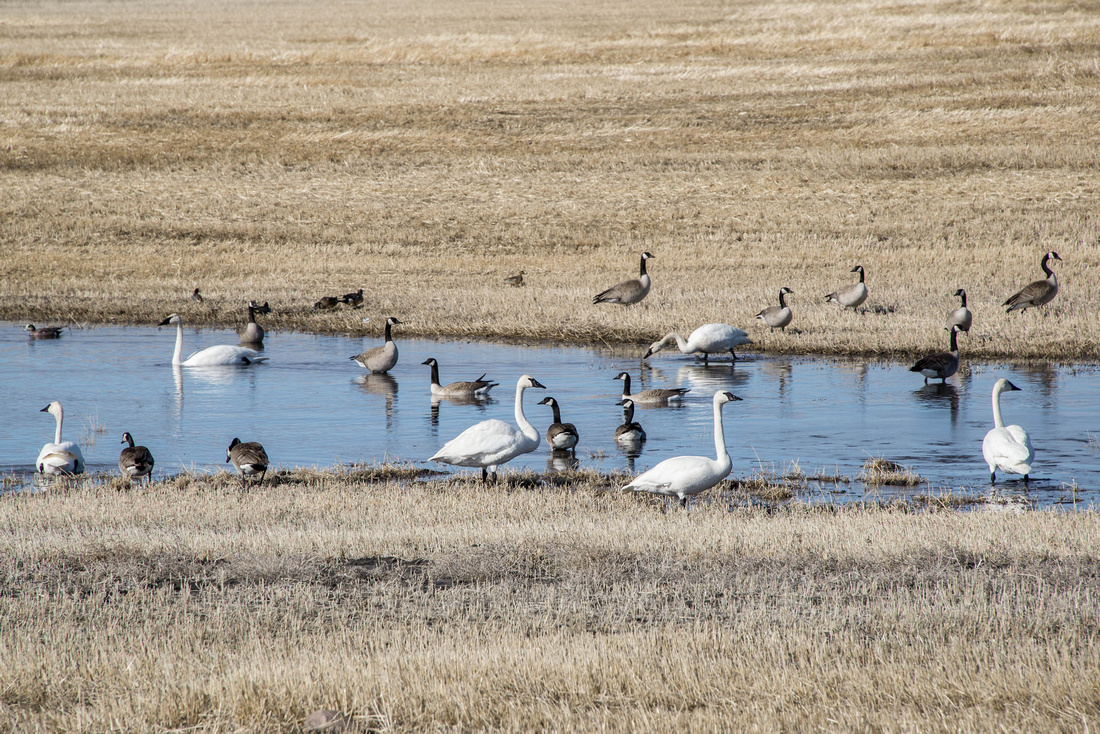 At this watering hole there were a variety of waterfowl. I identified American Wigeons, Mallards, Canada Geese and of course Trumpeter Swans. Not sure if any in this group were Tundra Swans. I post this photo to show the size differences in these birds. Geese are large birds but they are small compared to the swans whose wing span can be as much as 2.4 meters. 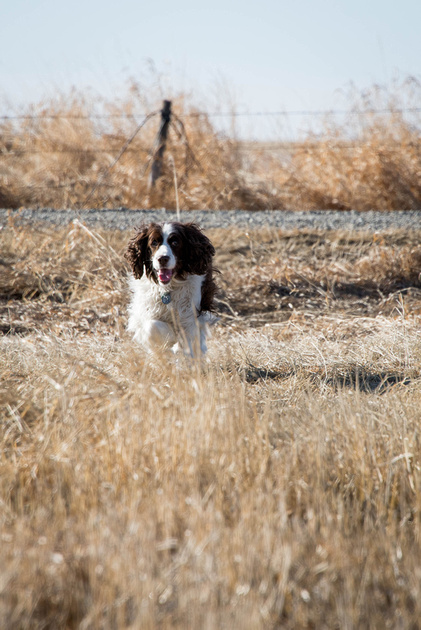 Finally after being stuck in the vehicle while I walked out in fields our Springer – Suzie is allowed out for a run. She is so hard to photograph, as soon as she sees the camera she turns away but I managed to get a couple of shots off before she made a hard right turn on me. I don’t know why she is so camera shy – I’m sure she is not in a witness protection program. 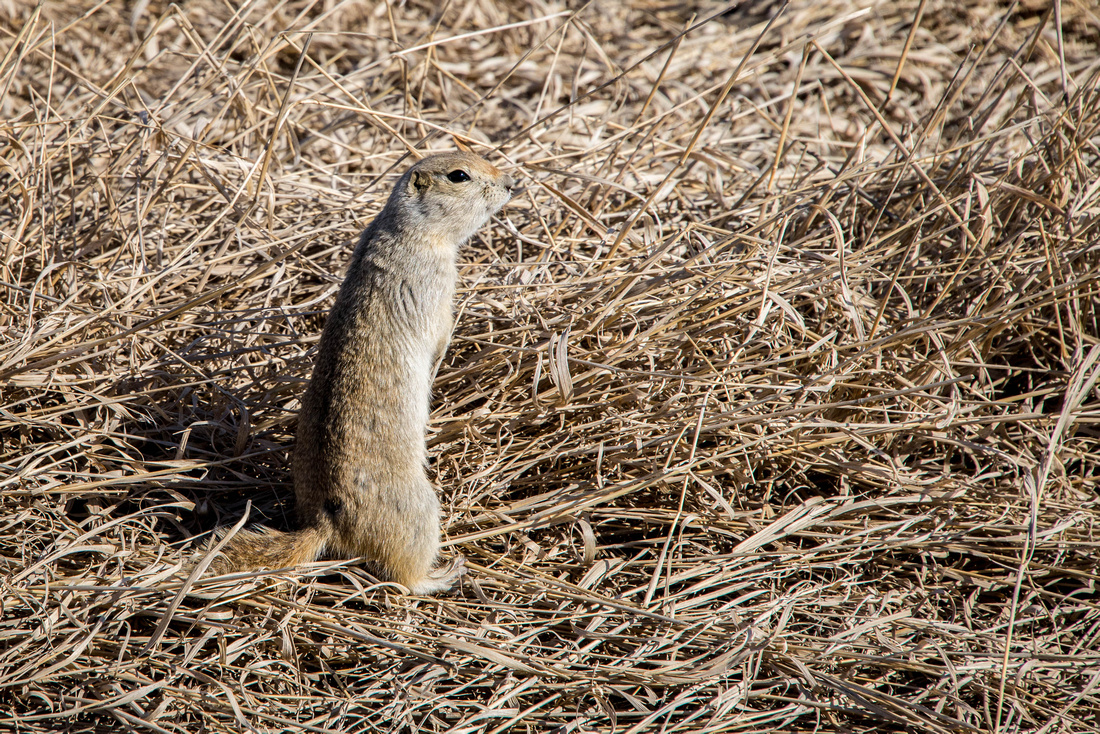 And the final sign of Spring - a Richardson’s Ground Squirrel or as we know them a Gopher.

Lessons learned on this shoot? I set my camera on the settings I thought I would find most likely and for the most part they worked well. I did up the ISO at one time to try and get a faster shutter speed. It was a bright day so that should not have been an issue but I was tinkering. Just remember – when you tinker, reset your camera or you may end up with settings not to your liking.

I don’t really have the lens necessary to get really close to wildlife. I tried walking down the road but these cautious creatures kept their distance from me so I had better luck staying in the truck and shooting from the window.

If you take your dog – make sure you have a supply of doggie breath mints – whew that was not nice. 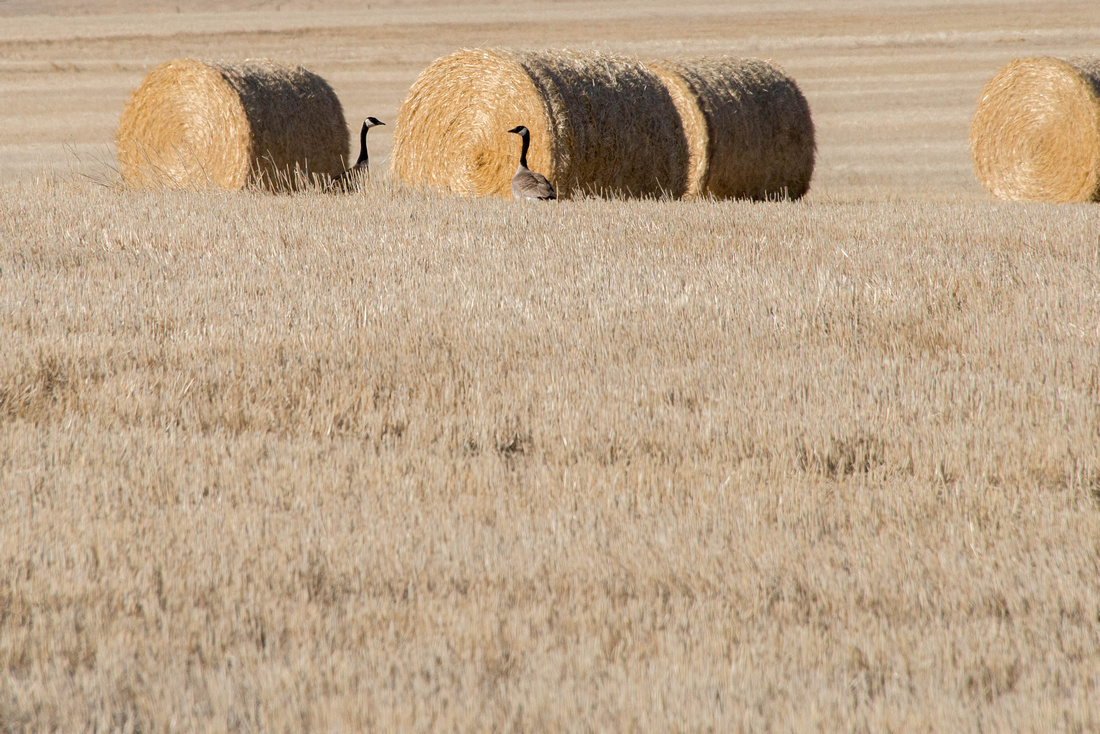 It was a gorgeous day, great subject matter and nothing I would have rather have been doing.